Geology On Your Doorstep By Dr. John Catt

Hertfordshire’s main topographic features, such as the Chiltern Hills and Vale of St. Albans, its valley patterns and soil types are all determined by the geological history of the area. These natural features in turn influence the county’s varied agriculture and semi-natural habitats and the distribution of its older towns, villages and industries.

Geological deposits are often divided into: 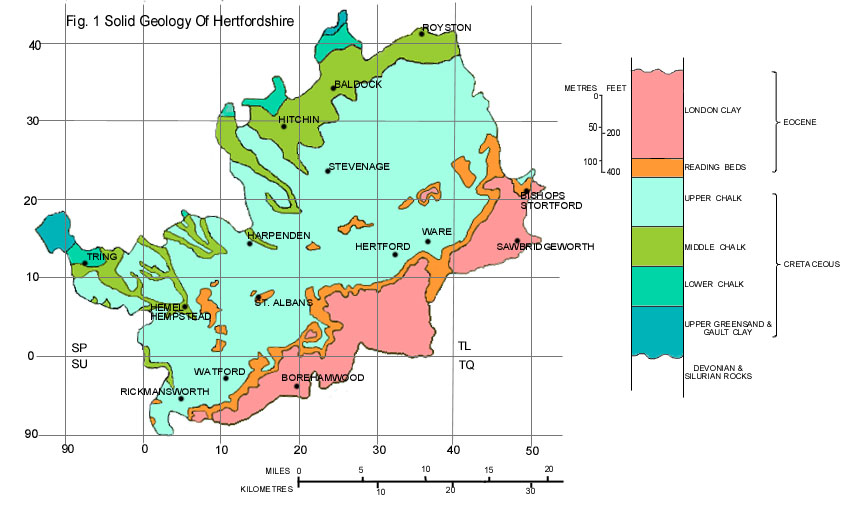 In Hertfordshire the oldest deposits occurring at the land surface are the Gault Clay and Chalk of Upper Cretaceous age (Fig. 1), about 100 million years old. The Gault Clay occurs only in two north-western extremities of the county near Tring and Ashwell, but it forms a continuous area of low-lying ground all along the foot of the Chiltern Hills, and has been proved in boreholes to occur at depth beneath southeast Hertfordshire (Fig. 2). 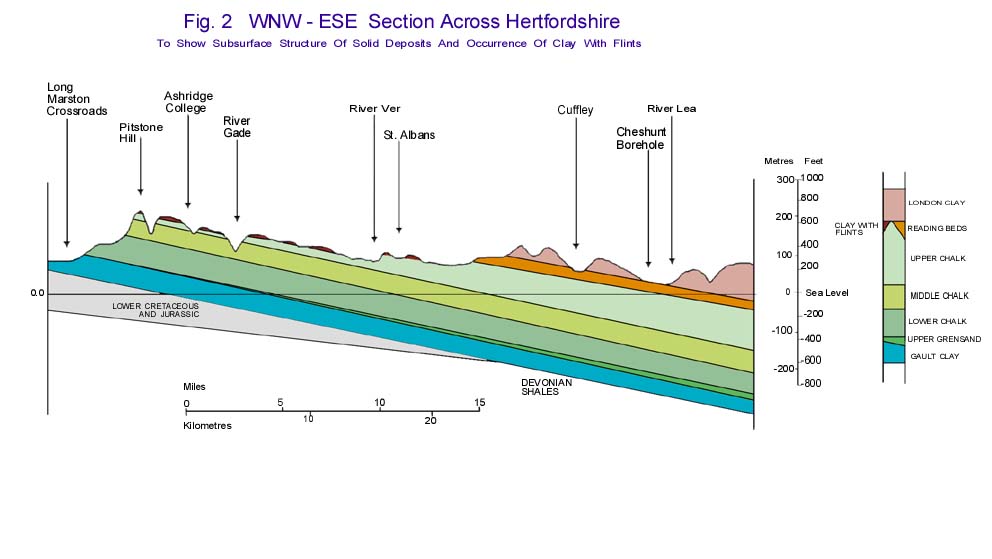 Both the Gault Clay and Chalk contain the fossilised shells of sea animals, such as ammonites and sea urchins, and were deposited on the sea floor. The Gault Clay is composed mainly of fine mud brought into the Upper Cretaceous sea from surrounding land areas by rivers. In contrast, the Chalk is composed almost entirely of calcium carbonate accumulated by microscopic marine organisms, especially planktonic algae. The sea in which it accumulated was much deeper and clearer, with almost no mud from the land.

In south-eastern Hertfordshire the Chalk is about 680 ft thick. It is divided into Lower, Middle and Upper parts by two layers 5-10 ft thick, which are harder than most of the remainder. The Lower Chalk (180 ft thick) often forms a bench projecting north-westwards from the base of the Chiltern scarp near Whipsnade and Ivinghoe. It contains the Totternhoe Clunch, which has been quarried at the village of Totternhoe since the 13th Century as a building and ornamental stone. Examples of its use can be seen in St. Albans abbey gateway, the font in St. Stephens Church, St. Albans, and many other local churches.

The Middle Chalk (220 ft thick) forms the steepest part of the Chiltern scarp, for example at Whipsnade. Its upper layers contain a few layers of flint nodules, which are composed of pure microcrystalline silica, probably derived from sponges and radiolaria living in the Chalk sea. Flint is also common in the Upper Chalk. It is a very hard material, which has has been used as building stone, mainly for facing external walls of churches and houses throughout the county.

The Upper Chalk thickens south-eastwards from about 90 ft on the Chiltern crest near Tring to a maximum of 280 ft beneath south-east Hertfordshire (Fig. 2). This is because at the end of the Cretaceous Period the rocks were uplifted and tilted, and then eroded unevenly before the next sediments were laid down on the eroded surface in the Palaeocene Period about 65 million years ago.

The main Palaeocene deposit in Hertfordshire is the Reading Beds, which consists of 30-50 ft of multicoloured clays with irregular patches of yellow sand and occasional bands of small (1-5 cm) black pebbles. It is a shallow sea deposit at the base, but upper parts were deposited by rivers flowing eastwards across the area. It occurs mainly in south-eastern parts of the county near Radlett and Essendon, but originally extended over the whole of the Chilterns. Patchy remnants or outliers of this earlier cover were left in north-western areas when most of it was eroded by rivers. Examples of Reading Beds outliers occur in northern parts of St. Albans, and at Ayot Green and Burnham Green. An interesting hard rock material sometimes found in the Reading Beds is Hertfordshire Puddingstone (see examples and posters relating to this on the stall).

After deposition of the Reading Beds there was a further cycle of uplift, tilting, erosion and then subsidence of the land beneath the sea. This led to deposition of the London Clay, which overlies the Reading Beds in south-east Hertfordshire and on some of the outliers to the north-west. The London Clay also extends and thickens south-eastwards beneath London. It is a grey or brown clay often containing fossils of marine shells or land plants preserved in iron pyrites (FeS2), a brassy mineral sometimes known as fool’s gold. 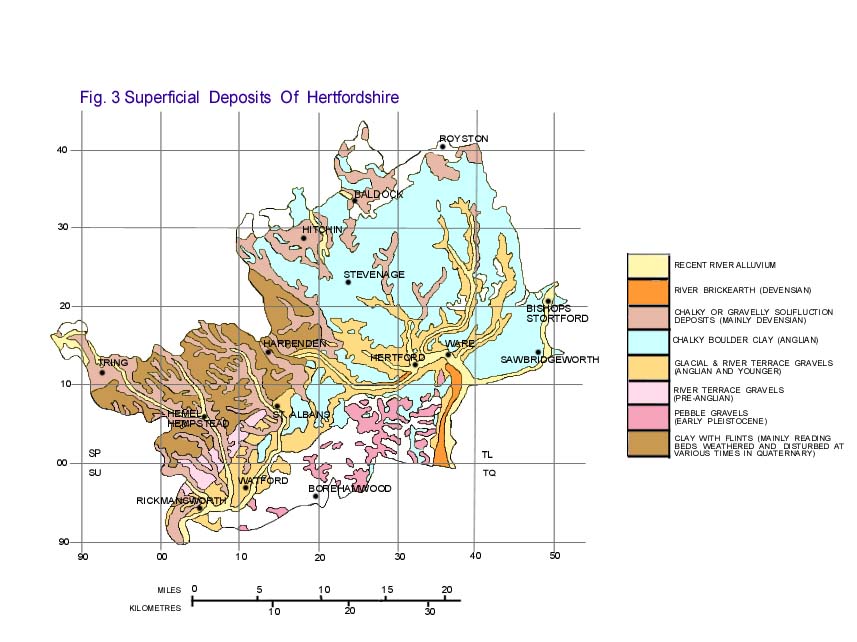 Compared with the solid formations, the superficial or Quaternary deposits of Hertfordshire (Fig. 3) are much more variable in nature and are often laterally impersistent. They originated in various ways, the four most extensive types being:

During the last 2 million years or so, the climate of Britain changed many times, from a moist temperate environment rather like the present day to very cold and often quite dry arctic conditions. The cold periods are often termed glaciations, because they resulted in the development of glaciers, often covering much of northern Britain, and the warmer periods are known as interglacials. Types (a) to (c) above were deposited in one or more of the most recent cold periods. Interglacial deposits were mainly formed in small lakes or streams, and are therefore even more localised in occurrence.

The gravels deposited by the Thames in cold periods form a series of gently sloping river terraces along the earlier course of the river through the Vale of St. Albans. The oldest are at fairly high levels on the Chilterns, and younger terraces occur at successively lower levels. Because of subsequent erosion each terrace occurs as patchy remnants. All are now composed mainly of angular, frost-shattered flint fragments, but originally they would also have contained large amounts of angular chalk fragments, which have been lost by prolonged weathering.

The Anglian glaciation resulted in deposition of grey Chalky Boulder Clay and associated gravels, both containing fragments of chalk, flint and many other rocks brought by the glacier from N. England, Scotland and even Scandinavia. The glacier reached as far south-west as Bricket Wood, and beyond this the water of the Thames was impounded to form a large lake. Southward overflow from the lake formed a new course, which developed into the present Thames valley through Middlesex and central London.

The Clay-with-flints occurs on higher parts of the Chilterns above the level of the highest Thames terrace. It often contains blocks of Hertfordshire Puddingstone and its mineral composition is like that of the Reading Beds. It is therefore thought to have originated by frost-disturbance and interglacial soil development in a thin veneer of basal Reading Beds surrounding the Reading Beds outliers.

During the later cold stages of the Quaternary, silt known as loess was deposited by the wind over the whole county, forming thin layers (usually 1-3 ft) over the Thames terraces, Anglian glacial deposits and Clay-with-flints. Thicker accumulations are present in many valleys, such as that of the River Lea south of Ware. The surface horizons of soils almost throughout the county are formed from this layer. It makes them fertile and very suitable for agriculture because the loess is easier to cultivate and retains more plant-available water than the underlying gravels or stony clays.

Note – We are grateful to Dr John Catt of the Herts Geology Society for allowing us to reproduce this article. In time we hope to amend this to reflect how it relates to the Ver Valley in particular. John was our speaker at our Markyate Open Meeting in July 2009.

You can find out more about the Herts Geology Society on their website. 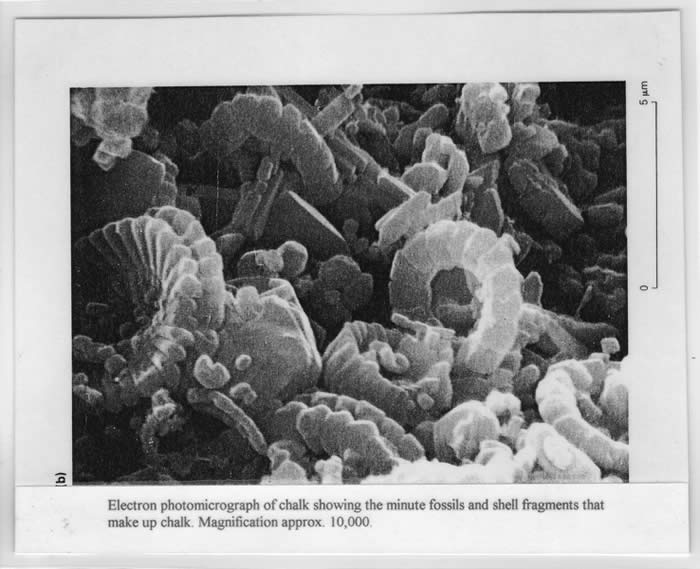